New discoveries on the pre-Columbian city of Wari, in the Ayacucho region, are exhibited. They were made by a team of archaeologists from the National University of San Cristobal de Huamanga over the past 10 years.

At the National University of San Cristobal de Huamanga (UNSCH) laboratory, archaeologists have gathered the pieces of vessels ritually destroyed in the city of Wari to shed light on a culture that was a warrior society and, at the same time, rested economically on a large-scale craft.

The Wari (600 to 1000 AD) were the grandparents of the Incas and, if Ayacucho is today the capital of Peruvian craftsmanship, it is not free: the work of clay is in the genes of his potters.

The temporary exhibition “Wari: New Discoveries and Testimonies of the First Andean Empire” was presented in two rooms of the UNSCH Cultural Center, in the Main Square of Ayacucho or Plaza Sucre.

The exhibit is the result of about a decade of work, which began in 2011, by a team led by Ayacucho archaeologists Jose Ochatoma and Martha Cabrera. The team completed its excavation activities in 2019. Subsequently, they began to analyze the archaeological material in the laboratory.

Wari is a great mystery. It is estimated that the pre-Columbian citadel housed up to 50,000 inhabitants at its peak and covered an area of ​​600 hectares, of which not even 50 hectares are visible. Most of them are covered with vegetation or located underground. 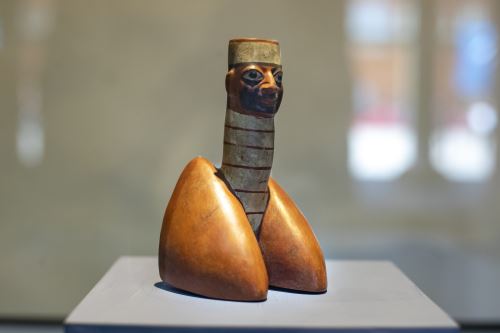 One of the finds that stands out from the exhibition is a very brightly colored ceramic representing a trachea, lungs and a heart. It is a unique piece that suggests new interpretations of this civilization, since only abstract representations had been observed in the past.

“This piece provided a link to unravel. It suggests that they made human sacrifices to their mythological deities,” explained Jose Ochatoma. Considering the high quality and detail shown in said piece, the Wari must have dissected corpses and made sacrifices.

Researchers from this civilization found plumb lines and other instruments that they used to build their cities.

While there were differing opinions on whether or not the Wari were an empire, one of the ships tipped the scales in favor of the imperial theory, suggesting the existence of a great army which conquered territories. This ceramic represents a character carried by a Wari warrior. It has feathers on its back and a rope around its neck.

“We believe the man being transported was one of the Huarmey chiefs conquered by the Wari; he was captured and transported to the Wari capital with a rope around his neck. The individual was found in 2013, in Huarmey (located north of Lima), by a group of Peruvian and Polish archaeologists led by Dr. Milosz Giersz,” Ochatoma said. 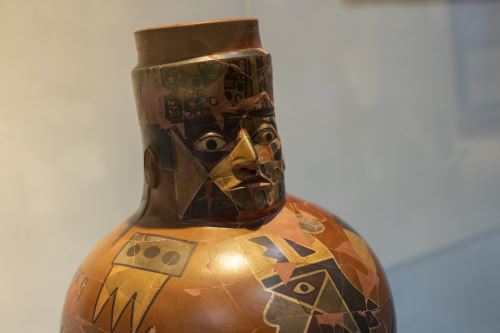 A similar scene has been identified on a third ship. It represents the Lord of Vilcabamba, who wears silver plates and is carried by another Wari warrior with a rope around his neck. Both are complemented by a container at the museum on Wari Square, where there is a depiction of heads with tongues sticking out, each with a different type of cap.

According to Jose Ochatoma and Martha Cabrera, when the Wari began their process of expansion, they captured these lords, brought them to the city, and cut off their necks.

New data made available through recent discoveries confirms that this culture, which originated in Ayacucho, had an army organized into specialized commands, each with different representations.

From lime to pozzolan

Another problem that the researchers checked with the restorer is that the Wari used pozzolana as a raw material for their constructions, taking advantage of the fact that there were several stone quarries in the vicinity.

Additionally, water shortage was solved by diverting water from a lake through a 16 km long canal system to distribute it throughout the city. This facilitated the development of craft activities. 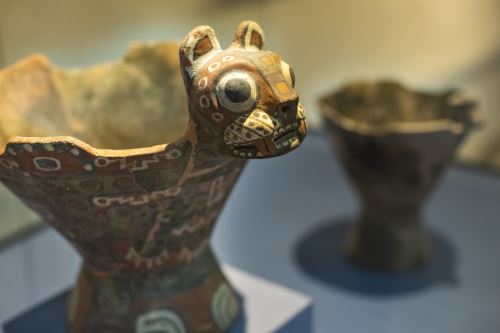 Another peculiarity is that the head of the feline, a deity that was already represented by the Tiahuanaco culture, in an abstract way, comprising a crown, legs and claws, undergoes a great change in Ayacucho: the ferocious God of Tiahuanaco becomes a deity corn production, according to the researchers.

If the first gods of Tiahunaco depict the rays of the sun as serpents and the jaguar as symbols of fire and rain; in the case of Wari, the deity represents corn. They also use representations of soft shisha and corn, as well as oilcawhich is a hallucinogen.

A decade of excavations carried out by Ochatoma and Cabrera in Wari have made it possible to find one of the few fabrics, because the acidity of the soil in the region does not allow these garments to be preserved.

Another important issue they shed light on is the presence of women: until now, there was no evidence of the role they played in the Wari civilization. However, it is now becoming clear that the best potters were women, thanks to a depiction of an elite woman holding a pen, brush and cup, which has been found.

“They are elite women because of the type of clothes they wear: tupu and cape. It was not a common garment for Wari women,” they explained.